Don’t Take Me Out to the Ball Game

Apple pie and baseball are American traditions. I’d rather have a brownie than a slice of apple pie and I hate baseball. If that makes me un-American, so be it. Baseball is tedious and about as entertaining as watching the grass in the outfield grow.  I’ve been told it is more exciting when you’re at a game, but people at the games drink a lot of beer. I don’t trust them to give me accurate information. 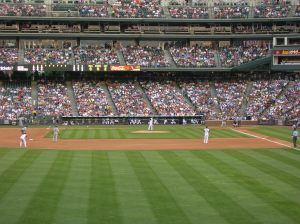 All that standing around and just a few minutes of actual excitement.

When Oregano and I were dating for a few weeks, he called me unexpectedly on a Friday afternoon.

“My dad just got tickets to tonight’s Yankees game. Can you get to my house by 5:00?” he asked.

“Um,” I stalled. I wanted to spend time with Oregano, but sitting through an entire baseball game would be a mind-numbing way to spend the evening no matter who I was with. Before I said no to his offer, I had an idea. “Would it be okay if I brought a book to the game?” I asked tentatively.

“A book?! Why would you bring a book to a professional baseball game?” He was perplexed by my question.

“I think baseball is boring. You don’t know me that well yet, but I tend to get a bit snarky when I’m bored. I could probably hold it together for about 3 innings, but after that all bets are off.  If I have a book to read, I’ll be able to keep myself amused making me a much more pleasant companion,”  I admitted, wondering how he’d react.  It was way too early in the relationship to let my smart-ass show.

“The seats are on the third baseline behind the dugout. You probably shouldn’t sit there reading,” he explained.

At the risk of squelching our budding romance I said, “Thanks for asking me. Those are great seats. You should really bring someone who appreciates that fact and who will enjoy the game.”

Oregano agreed and took a friend. Thankfully, my disdain for baseball wasn’t a deal breaker for our relationship.

Several years later we encountered another baseball related conundrum. Our friend was having a birthday party at a minor league baseball game. I wanted to be there to celebrate with him, but the thought of sitting through a game was daunting.

“It will be fun. Some of our friends will be in the stands with us. We’ll be in a separate section so you can move around and talk to everyone,” Oregano said trying to convince me as we left the house.

When we arrived at the game, we ate and mingled with our friends while the players went about their business on the field. There was a lull in our conversation so I glanced at the score board. It was already the 7th inning. I looked at my watch.

“Hey, you were right. This isn’t so bad! It’s been about a half hour and we’re already in the 7th inning,” I said enthusiastically to Oregano.

“I don’t know how to break this to you, but that is the 7th inning of the first game. They weren’t able to finish last night’s game. They had to stop in the 5th inning. They’re finishing that game before they start the one scheduled for this afternoon. It’s kind of a double header.”

I became apoplectic. “What are you saying?” I was trying to process this new information. “Do you mean to tell me that there are two more innings in this game PLUS another 9 innings?” I sputtered.

Once the initial shock subsided, I turned to Oregano, “OK. Here’s the deal. I agreed to attend a baseball game. That’s a total of 9 consecutive innings.”

“Unless it goes into extra innings,” he interrupted.

I gave him the look and continued. “I don’t care how you divvy those innings up, but after 9, I’m leaving. I’ll come back and get you if you want to stay, but I can’t keep the snarky beast contained for 16 innings.”

Oregano agreed to my conditions. As it turned out, he wasn’t thrilled with staying at a minor league game for that long either.

A few more years passed before baseball became a topic of conversation again. This time we were on vacation in Colorado Springs. Oregano mentioned that the Mets were playing the Rockies in Denver. I know the Mets are his favorite team. Maybe it was the lack of oxygen in the thin air clouding my judgment, but I heard myself say, “Denver isn’t that far away. Go online and see if there are any tickets left for tonight’s game.”

Oregano stared at me in disbelief. “Your voice sounds like my wife’s, but those are never words I would have expected to hear coming out of her mouth. Do you realize what you just said?”

“Yes. I know what I said. If I were you, I’d jump on this opportunity. Who knows how long it will be until I make this offer again?”

Oregano quickly purchased 2 tickets to the game. When we got in the car to drive to Denver we noticed that the thermometer read 98 degrees. I have a heat activated bitch switch and I volunteered to sit in this kind of heat to watch a baseball game; clearly I underestimated the effect the high altitude had on my reasoning skills.

By the time we walked from the car to the stadium, we were both drenched in sweat. Oregano looked at my pink cheeks and glistening brow and offered these comforting words, “I’m sure it will cool off once the sun goes down.” 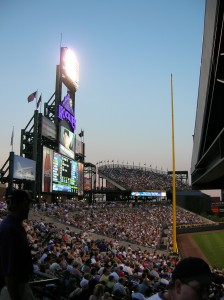 We arrived at our seats in left field. Holy crap! It was hot! What little breeze we’d had walking to our seats disappeared once we crammed ourselves in among the other sweaty spectators. I leaned back in my seat with a vat of lemonade. I had just gotten as comfortable as I was going to get when I heard a loud cracking sound. Everyone around me jumped up to try to catch the home run ball whizzing in our direction.  I assumed the crash position hoping I wouldn’t be hit by the ball or the people clambering to try to catch the ball.

Some lucky fan plucked the ball from the air and the crowd began to sit down. Oregano turned to talk to me and noticed that I was all hunched over. “What are you doing down there?” he asked as he settled back into his seat.

“Just staying safe,” I answered casually with my voice muffled by the arms covering my head.

“You do realize that it’s customary and fun to try to catch a home run ball,” he chuckled.

“I’ve heard that, but I’m fine down here protecting my head from the hard, high-speed projectile hurtling our way,” I replied.

When we exhausted our supply of lemonade and the sun dipped below the horizon cooling things off to a chilly 95 degrees, Oregano volunteered to go get us more liquid so we didn’t instantly burst into flames.

While he was gone, the game continued. The pitcher pitched. He scratched his crotch. He pitched again. He spit. He scratched his crotch. As sweat rolled down my spine and pooled in my underwear, I couldn’t imagine why people paid money to sit in this heat to watch this. Just then I heard the crack of the ball on the bat. Players started running and the crowd was cheering.

Oregano returned, his arms laden with liquids. “What happened? What did I miss?” he asked excitedly.

The man seated in front of us started laughing and turned around. He looked at Oregano and said, “It was a 6 to 3 play. Grounder to short stop and he threw the guy out at first.” Then he turned to me and smiled, “Not a fan of the game, huh?”

“Is it that obvious?” I asked. “In my defense, I accurately recounted the events. I was just missing some inconsequential details.”

We sweated through the rest of the game. I couldn’t tell you who won or what the score was, but the evening wasn’t a total waste of time. With that much sweating I was sure I had lost a few pounds. When we walked out of the stadium at 11pm, the temperature on the sign read 90 degrees. “See, I told you it would cool off once the sun went down,” Oregano said wringing the sweat out of his t-shirt.

“That was a memorable outing. Be sure you remember it because I am NOT doing that again,” I said cheerfully. 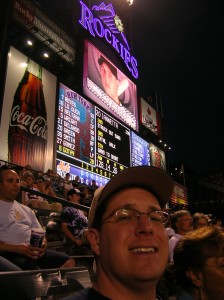 Oregano enjoying the one and only time I’ll ever be at a major league baseball game.

Those experiences have done nothing to change my feelings towards baseball. If anything, they have solidified my opinion. Every October when television is inundated with playoff and World Series games, I am irritated that shows I want to watch have been preempted.

During this year’s playoffs, Oregano made an announcement. “I have a surprise for you. I know how much you dislike baseball, but they have found a way to make it even more torturous for you.”

“Really? How could they make it worse?” I was curious.

“There is something called sabermetrics. It’s a detailed mathematical and statistical analysis of baseball records. They are showing tonight’s game with all kinds of statistics on the screen while the game plays in the background. They’ve managed to combine your two least favorite things: baseball AND math,” he chuckled.

“I didn’t think it was possible to make baseball more boring, but they’ve managed to do it. That’s impressive!” I said walking out of the room as he turned on the game.

**And now a word from our sponsor**

My story “Looking a Gift Horse in the Mouth” is in Scary Mommy’s Guide to Surviving the Holidays. I’m thrilled to be included in a book with so many talented writers and to be contributing to the Scary Mommy Thanksgiving Project. You can learn more about the project, order the e-book or donate to this worthy cause by clicking here.

I was born with an overly developed sense of humor and poor coordination. The combination of these two character traits has taught me humility and given me the perspective to find the funny in everyday experiences.
View all posts by Paprika Furstenburg »
← All the Colors of the Rainbow… and Then Some
Jack O’Lantern Seeks Jill O’Lantern →